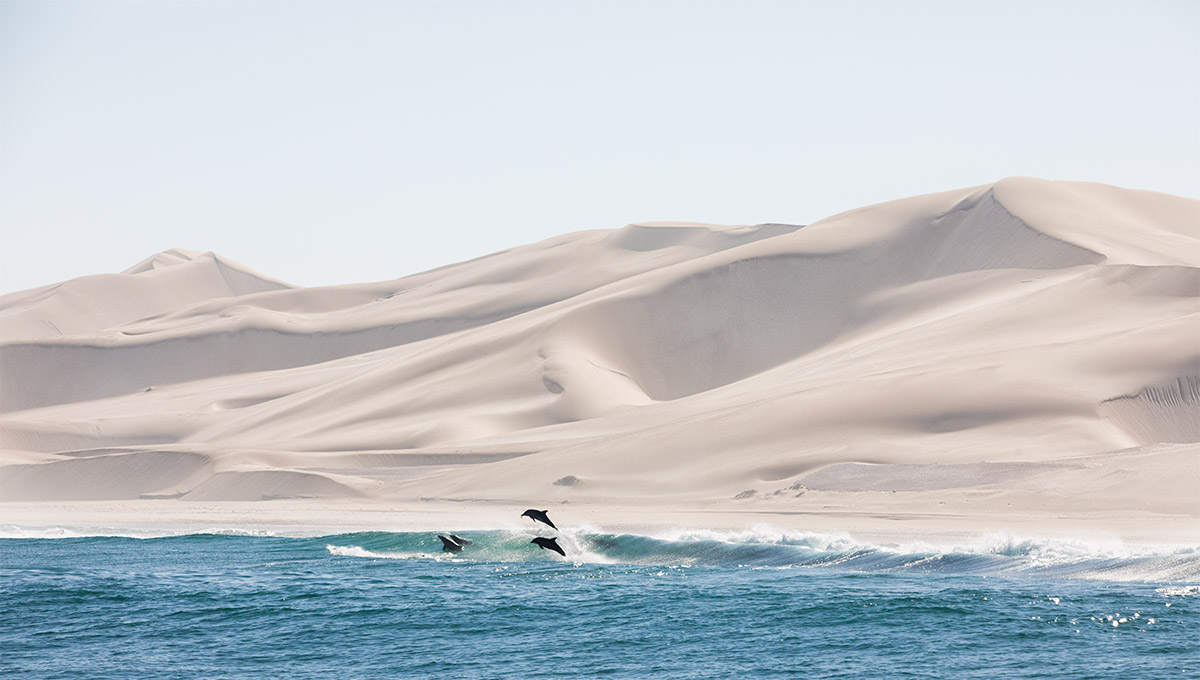 South Africa is my home, and I do much of my “work” there.  Can I even call it work, as I cannot imagine doing anything else?

To prepare for this shoot, I knew I was going to need very specific camera gear that would allow me to work in breaking surf. This meant a camera body with a high frame rate, very good autofocus and an ultra-fast lens that could cope with all the movement that comes with working on a moving boat.

It was a two and a half hour boat ride, all the while battling the waves of the Indian Ocean, from Port Elizabeth Harbour to the uniquely magnificent Alexandria Dune Fields located along the shoreline of Algoa Bay. Knowing this was an area regularly patrolled by the Indo-Pacific bottlenose dolphin in their search for various species of baitfish to feed on, I was also hoping to find them playing and surfing in the breaking surf. I knew that by using the dramatic dune-scape as a background to the athletic feats of the dolphin would create a captivating image.

On this shoot, the actual photography was only one of the ingredients in the creation of an amazing visual. The more unpredictable challenge was to align the two key components which required darting in between sets of waves that reached 6 or 7 feet without rolling the boat, and then travelling in tandem with the dolphins whilst hoping for a spectacular exit from the waves they had just surfed.

The challenges were numerous and hours ticked by as the dolphins moved ever closer to the end of the dunes and thus the window of opportunity for my perfect canvas. On so many occasions we would be heading into the surf only to encounter a shallow reef that prevented us from following the dolphins too closely, or have a set of wave’s force us back out, the boat captain steering harshly, sending us all grabbing for a railing. And so many other times the dolphins would choose not to surf what we felt sure was a perfect wave.

Capturing wildlife doing incredible things doesn’t always go as planned…. My memory card from this day has hundreds of shots of barely-there tails and splashes, the dune in the background not quite perfect, and of course images not completely tack sharp due to navigating the unpredictable waves. But patience sometimes pays off, and I was rewarded with this moment when dolphins and dunes danced together.

Like a well synchronized team, a family of bottlenose dolphins athletically leaps out the back of a wave set against the mesmerizingly beautiful backdrop of caramel colored dunes.