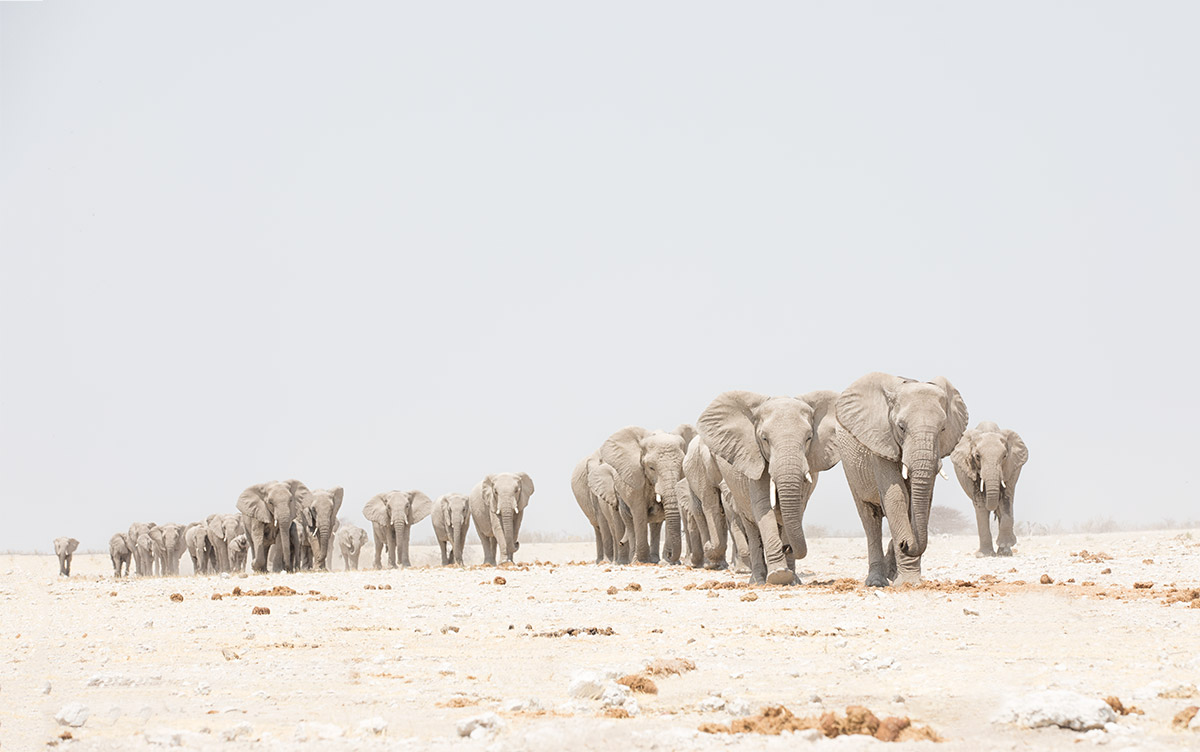 I can well remember the heat, the flies, the dust and the discomfort at the time of this work’s conception. Temperatures were topping out at 40 Celsius in the shade, of which there was very little, and a glaze of sweat on my exposed face soaked up the pulverized earth. Opportunistic flies buzzed all around. Hours upon hours were spent waiting and watching for the herd that we knew walked this particular path almost daily. A small kopje provided an excellent vantage point for surveying the general areas, and every half an hour I would ascend hoping to spot the approaching herd. That being said, my suffering and challenge was brief by comparison to that of the herd.

On Namibia’s Etosha Pan, the mirage that shimmers like water is a deceptive mistress. Only knowing which of the scorched dusty trails will lead to thirst quenching water, can the matriarch and her family hope to survive. Generations of elephants before her have trodden this trail in the endless endeavour to persevere through the tough, unrelentingly hot, dry months. The Pan is actually an ancient lake, dried up long ago, leaving an expanse of salt and minerals covering thousands of square kilometers.  It more closely resembles the surface of a different planet, with the clouds of salt dust hazing the horizon. Information that is vital for survival is passed down from generation to generation, and from matriarch to matriarch and in so doing these myriad and meandering paths are committed to memory.  Somehow they manage to navigate a landscape that looks more lunar than terrestrial, and choose paths that bring both water and feeding areas in proximity of one another so that both are accessible each day. As food is consumed, a new foraging area must be sought along with a new path to life giving water.

The harshness of the environment is juxtaposed against the soft and caring nature of the herd. A herd of elephants comprised of individuals is the sum of it of its parts - the young, the strong, the weak and the aged. The herd is a living, breathing singular entity in which every individual looks out for each other member. The trumpeting of an elephant is a well-known sound, signalling excitement or anger, but our human ears are missing the real conversation.  Most communication between elephants takes place with hyposonic “mumbling,” which happens below a frequency audible to human ears. It is those imperceptible tones that bind them even more tightly.  I wish I could hear the conversations of herd members, between mothers, daughters, aunties and grandma, all soft and supportive--I would love to join in the mumbling. They share water and nourishment, communicating silently while facing challenges and navigating difficulties. And at the helm is a formidable female, a female who has endured and persisted through drought, famine and fang.

These remarkable pachyderms have adapted to ever declining levels of water in their environment.  While nothing may reverse the primeval drying of the pre-historic lake they now trek upon, doing our best to preserve the environment we have seems wise.  Water is our most precious resource and without it we perish.  Already communities around the world, animal and human alike, are mitigating new and ever worsening scarcities of water.  We owe it to ourselves and to all our fellow-inhabitants to be conscious of how we treat and conserve water, for now and forever.

As both an individual and within a family, adapting to changing conditions, to new contests, is a call to duty.  To reject the unceasing challenges is to forsake yourself and those you care about.  When I look at this image I see survivors, a family made strong through love, endurance and empathy for all its members against an unemotional and unrelenting enemy, the climate of change.