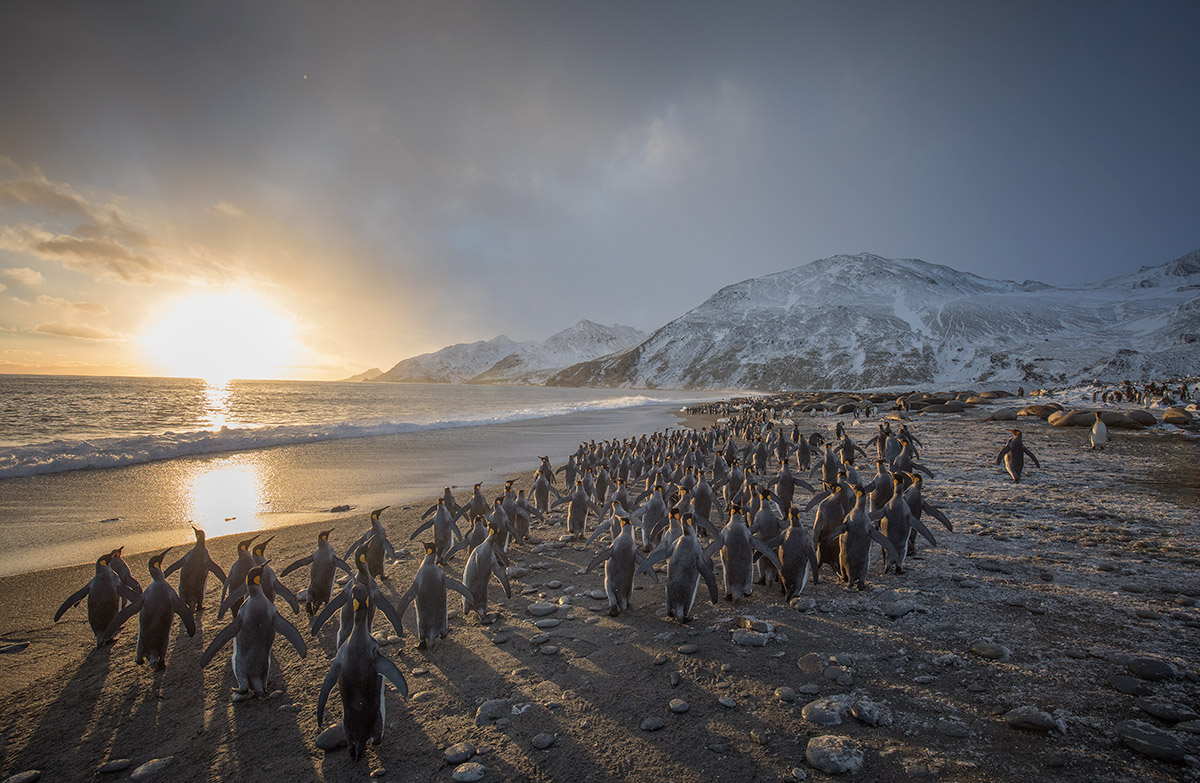 It reminded me of being at New Delhi Station and being surrounded by the hustle, bustle, and organised chaos that goes along with such a throng of life all in a hurry to go somewhere. The difference here, however, was the pristine beach; there was no footfall of humanity and it is a bastion of hope for what our natural world can look like if we better protected it.

From my home to this magical refuge it is a mere 48 hours of numerous airports and aeroplanes followed by five days and five nights on a small expedition ship, but worth every moment of challenging travel. Few persons are lucky enough to witness this sight in person, and there can be few places on this planet more spectacular at sunrise than St Andrew’s Bay, South Georgia Island. Far removed from civilization, these majestic creatures find refuge here from the notorious Southern Ocean seas but at the same time South Georgia also gives them access to the nutrient rich feeding grounds in its proximity. The jagged hills of ice and stone, in shades of blue, gray and glistening yellow-white are all the eye can see.  Not a building, or a tree, or any signs of life rising to the sky.  The stretch of horizon speckled instead with thousands and thousands of living forms, the cacophony of their identifying calls, that akin to F1 racing cars revving their engines, a kind of music to my ears;  the smell of a 750,000 strong penguin colony a complete assault on my sense of smell.

Set deep in the tempestuous southern latitudes, St Andrew’s Bay is home to the world’s largest colony of beautiful King Penguins who depart daily by the tens of thousands as the first rays of golden sunlight kiss this ice covered beach. For each feeding sortie, adults leave their down-covered chicks within the safety of the colony as they waddle, ungainly, down the steep beach, dodging elephant seal harems and imposing Antarctic fur seals protecting their territories. Like tipsy soldiers, they move in wavy lines as they make their way towards the heavily pounding surf break, and plunge expertly into the foreboding sea. It’s in these icy waters each day that they go in search of lantern fish, icy squid and krill, as they dive to depths of over 100 meters, no scuba gear required.  They are one of many marvels of the sea, and I am filled with awe.

With camera in hand, I stare unbelievingly at the volume of life that lay all around me. Photographically the challenge was not of having too little to photograph, but rather having to select from the incredible opportunities all around me. On offer from the photographic buffet were portraits to be had of what I consider to be the most beautiful of the penguin species, with their complementing colours of orange, grey and white, clusters of Oakum Boys who are the aptly named chicks, and Olympic-like entries into the pounding surf. Then there are individual scenes of drama that play out between penguins on the move and dominant elephant seals, and finally the incredibly raw life-and-death battles between predatory birds and the weakest links in the colony.

Looking out over the sea of organised chaos, I am honestly feeling a bit overwhelmed; I felt the truest message that I was receiving was one of the whole.  Each individual was important, of course, but this whole colony, looking at the rising sun gave me an undeniable sense of hope. Each dawn brings a new day and a new beginning, for them and for all of us.

While these King Penguins face no immediate threat from human populations as they live in an incredibly remote location, other species are not as fortunate.  If we as the dominant species on the planet can live with an eye to preserving habitat for other creatures, I think it could do exponential good.  Life is all about balance, and balancing our needs as humans with those of the rest of the planet will ensure a better life for us all.

Staring down that beach, looking, listening and feeling so alive will always be one of my life’s greatest highlights. If you were to ask me where I would choose to spend my last day, it would be with loved ones enjoying this scene and sharing it for posterity.